Meetings That Work–and Get Work Done! 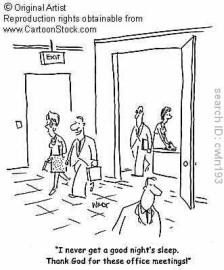 If you find these cartoons humorous, it’s unfortunately likely this is your workplace reality. You are not alone. Why is it common for meetings to be major obstacles to getting things done? Objective. Every leader of a meeting hopes it will be productive; however, specific meeting objectives may vary. It takes more than hope to have a productive meeting. Here are 6 types of meetings, with very different objectives:

“Have a meeting to have a meeting” meeting. These meetings are set in stone on the calendar at the beginning of the year (say, every Monday), and are committed to and protected at all costs. All efforts are focused on finding things to do for the meetings. These meetings never end early, because the leader has spent hours (or even days or weeks!) stressing over how to fill the entire time. In some cases, these meetings result in bonus “emergency” meetings to finish the leftover “work” that time ran out on at the previous meeting.

“I’m the boss” meeting. These meetings rarely begin on time, as the boss likes to make a grand entrance with all present. It’s very ego boosting for the boss: all things come to a stop when he enters, and all eyes are immediately on him. Now the agenda may begin. And when the boss’s presentation/talk at you part of the meeting is over, he can often be found tending to his personal to-do list, taking calls, or even nodding off, while others present and painfully power through the misery. Oh, and since it began late, don’t expect it to end on time. Especially in conjunction with the following…

“In trying to create an agenda that fills the entire preset calendar commitment of meetings, I have convinced myself these things are important to me, so surely they are a priority for you” meeting. A subset of the “I’m the boss” meeting, this meeting has you continuously stupefied in trying to comprehend how these agenda items are worthy of the time away from all the other things you’ve been directed to do, plus the things you know must get done in the best interest of kids and families. The time periods on the agenda are simply suggestions–or worse, template space fillers–and (loosely relevant to begin with) topics frequently spin off on magnificent tangents. These meetings are sure to result in bonus “emergency” meetings to complete the agenda. The only saving grace of these meetings is texting/chatting confidants the “can’t make this stuff up” things you’re being subjected to–unless, these meetings are in conjunction with the following…

“I don’t fully understand the benefits of technology to work production, so it’s not allowed during our meetings” meeting. Any hope you had of being productive is out the window with these meetings. The only work that gets done during these meetings is writing notes to yourself about all the tasks you need to retroactively complete when you are free to return to the 21st century: email your boss that phone number he asked for during the meeting, verify facts presented during the meeting, share a link with the group that would’ve brought clarity to a topic of conversation during the meeting, add some important work related events to your calendar which were shared during the meeting, forward the data to the group that would have made a 25 minute discussion during the meeting moot, begin a google doc to be shared with the group to recap significant information from a discussion held during the meeting, send a doodle to the group regarding an offshoot committee formed during the meeting, etc. These all could have been taken care of on the spot during the meeting, when most meaningful; however, due to technology being prohibited, they must wait, and most likely will not be done until hours, days, or weeks later–if at all. The leaders of these meetings are fully aware of the potential for off-task emailing, g-chatting, texting, and game playing on devices; however, they’re not at all aware that the prohibiting of 21st century devices is entirely independent of their value-lacking content they’ve prepared, which is the cause of the off-task behavior. They’ve also forgotten the power of paper and pens to make grocery lists, pass notes, doodle, and play “dots”. Whether it’s to accomplish work, or pass the time because there is no work to accomplish, you’d give anything for your phone, laptop, iPad, tablet, or any other 21st century work tool. Instead, it’s just you, the pen you borrowed from the person on your right, and the sheet of paper you borrowed from the person on your left. That is, if you’re awake. Otherwise, you need to borrow a tissue from the person on your right to mop up your drool puddle, and apologize to the person on your left for kicking them when you jumped during that crazy weird dream you just had.

“Story time” meeting. These meetings are spent with the leader reading emails to you that he sent earlier in the week. Want to read along? No, you aren’t allowed to have your computer in the meeting, but never fear–boss has print outs of the email to pass out to everyone. After getting the group warmed up with some announcement email reading, the boss may move on to reading a PowerPoint presentation to you. Yes, the one he emailed you earlier this week. No, you are not going to take action on it during this meeting as if you had read the email earlier this week as required. No, you cannot follow along on your computer, because your computer’s not allowed. No, you cannot follow along on his computer projected for all to see. But, yes, he has color print one-sided stapled packet handout screenshots of the PowerPoint for all to follow along with as he reads to you. And if you’re lucky, the screenshots being read at you while you follow along in your packet are step by step instructions to do something new on your…wait for it…computer! Yes, the one you had to leave back in your classroom/office for these meetings! You are being “trained” on new computer skills, programs, apps, etc., because your District is committed to 21st century education, blah, blah, blah. Oh, the irony. Ugh.

Meetings should not be a break from getting things done. Times are changing. Expectations are changing. So must our practices. Leaders, with so much to accomplish for our kids, staff, and families, and so little time, let’s make meetings an effective use of everybody’s time.

Have I missed a meeting at your school, district, or work place, or other ways to maximize meeting time? Please share.